Check back here frequently as events (and event details) will be added throughout the school year! 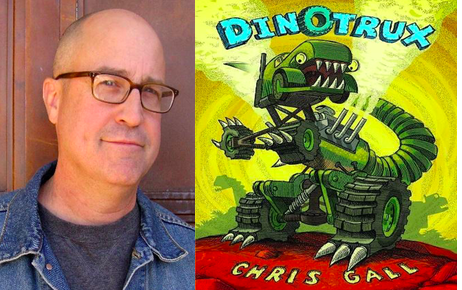 Mariemont is thrilled to bring author Chris Gall to our school for Author Day, 2020.

Author Chris Gall is an award-winning author and illustrator of many books including, Awesome Dawson, Nanobots, Revenge of the Dinotrux, Substitute Creacher and Dinotrux, a 2009 Publishers Weekly Best Children’s Book. His latest book, Go for the Moon: A Rocket, a Boy, and the First Moon Landing, was just released this year in honor of the fiftieth anniversary of the first moon landing. It captures the hours leading up to the moon launch, the landing and provides technical details that will delight any budding scientist!

Always an avid reader, he recalls being grounded from going to the library as a young boy! “My parents said I was spending too much time there!” He read books about different things as he was never sure what he wanted to be when he grew up – Astronomer, Geologist, Oceanographer, Spy, etc. Gall and his family moved often and he learned to adjust to his new home by reading, drawing, writing and seeking new adventures. In fact, he once tried to launch himself into space in an old, beat-up water heater!

In second grade, he was caught drawing pictures on his desk. His teacher made him clean all of the desks in the classroom and suggested that he might be an artist someday. In 7th grade, he won a Read Magazine Young Writer’s Award that inspired him to write stories to go along with his art. His first book, “America The Beautiful” was a Publishers Weekly Best Children’s Book of 2004 and illustrates the popular anthem written by his great-great-grand aunt Katharine Lee Bates.

Always fascinated by machinery, cars, trucks, planes and trains, Gall created the popular picture book, Dinotrux. “It’s about an ancient race of trucks that existed in prehistoric times before the rise of man, but after the demise of dinosaurs,” he said. Dreamworks made a cartoon adaptation of Dinotrux that appears on Netflix.